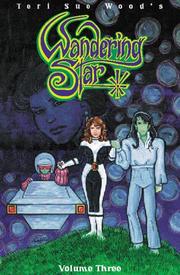 Wandering Star tells two discrete stories of two young girls, one Jewish and one Palestinian, who meet once briefly by chance. Their stories are connected by substance, rather than plot. Each is a wandering star in search of a homelandEsther escaping the Nazi Holocaust, and Nejma, who experiences the horrors of life in the camps/5. Books from Wandering Star Bran Mak Morn by Howard, Robert E.. Trade - Bill's Copy: Sold Out Limited: $ Robert E. Howard’s Complete Conan of Cimmeria Volume One () by Howard, Robert E. Limited: Sold Out Robert E. Howard’s Complete Conan . "Wand'rin' Star" was covered by English comedian and novelist Julian Clary; his version was released as a single in the United Kingdom in , backed with the self-penned track "Uncanny and Unnatural". The song was covered by Shane MacGowan and The Popes on their album The Crock of Gold.B-side: "I Talk to the Trees", (Clint Eastwood). Wandering Stars, by Sholem Aleichem, and translated from the Yiddish by Aliza Shevirn, is a journey into Yiddish Theater unlike anything you have read on the subject. Jews are known as wanderers, and Aleichem’s novel not only evokes that theme, but also infuses the story with characters-turned actors straight from Holeneshti, a Russian shtetl /5.

Listed as "Volume One of Two" as at the time the Wandering Star series was planned to last twelve issues. Series was later collected as Wandering Star (SIRIUS Entertainment, Series) Vol.   50+ videos Play all Mix - Lee Marvin I was born under a Wandering Star remastered YouTube Marty Robbins - El Paso (Audio) - Duration: MartyRobbinsVEVO 1,, views. Wandering Star (original title: Étoile errante) is a novel by French Nobel laureate writer J. M. G. Le novel tells the story of two teenage girls on the threshold and in the aftermath of World War II. Esther, a French Jew who flees for Jerusalem with her mother just after Italy's occupation of a small section of south-east France ended during World War II; and Nejma, a young Arab Author: J. M. G. Le Clézio. Usagi Yojimbo Book 3 collects full-length Usagi stories from issues #7 through #12 of the original Fantagraphics series, including "The Tower" (which introduces Usagi's traveling companion Spot the Wonder Lizard), "Return of the Blind Swordspig," "A Mother's Love," "Blade of the Gods," "The Shogun's Gift," and the hilarious Groo tribute "The Tea Cup," co-starring the/5.